The Zen of Spinning Alpaca

The next best thing to spending time with my alpacas is spinning their fiber into yarn.  I was quite pleasantly surprised when I discovered how much joy spinning gives me.  When I first started spinning, it was more about economics.  With my limited budget, it made sense to learn how to spin and maximize my profit.  The more it's processed by others, the less profit.  Then the reality hit of how much time and labor it takes to make that skein of yarn and boy were my first few skeins rather hinky looking.  But I later found out those are called "art" yarns and they sell for a lot AND once you learn how to spin nice and consistently, you take lessons on how to make yarn like you did when you were learning!  Go figure.  But as I got the hang of it, I found out that it is really relaxing.  It is very zen like to sit and spin in the evening.  Or sometimes when I really need to have a down day, I sit and spin and watch old movies.  It's very restorative to a tired body and mind to have a day or afternoon of doing that. 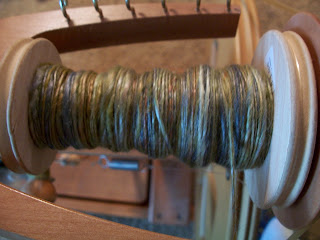 There is something about the zen of spinning too.  In New Zealand after the major earthquake, The Ashford Company that makes spinning wheels noted that there was an increase in spinning wheel sales.  The article I read stated that people were being attracted to spinning to help calm their jittery nerves.  Dusting off my old master's degree in psychology, that makes sense.  Using the bilateral motion of your feet (I use a double treadle), both sides of the brain are stimulated.  There are psychotherapy techniques that use bilateral stimulation in treating trauma and Post Traumatic Stress Syndrome.  Could be an interesting new modality for therapists! 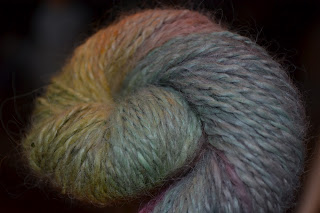