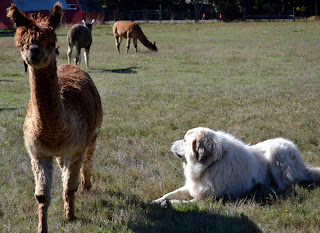 Having a livestock guardian dog has so many benefits.  I searched the various breeds that are known for protecting herds and chose the Great Pyrenees.  I found a breeder, Wings and a Prayer,  that also is an alpaca breeder so the puppies are raised right along the alpacas from day one.  Naming animals is sometimes a challenge but his name came quickly to me.  Moose was chosen knowing what a big dog I was going to have.  When he was a puppy, people didn't quite get the name but I said, "Just wait."  Everyone that meets Moose now say what an appropriate name he has.

Moose has amazing instincts.  He knows his job and loves his work.  He will run to the fence when he sees the neighbor's dogs out playing and he stands between them and his herd.  He is non-threatening to them but he makes sure they know he is there and no one is allowed into the field without my permission.  When he doesn't have anyone to shoo away, he chases the birds out of the field making it a big game.  Moose is so lovely to watch when he opens it up and runs full head of steam to chase off whatever he feels doesn't belong near his alpacas.

Moose knows his manners around the alpacas.  I sometimes forget that he must wait for an alpaca to cross his path and I get impatient when I'm calling him and then I see his face that tells me that he doesn't have permission from the alpaca to move so I go out and step between him and his alpaca so he can.  I feel sheepish after feeling impatient when he is doing what is appropriate around his alpacas.

An added benefit to having my livestock guarding is how good he markets my alpacas.  He actually helped sell some alpacas!  Potential new alpaca owners were debating on if they wanted to get these creatures for their property and then they met Moose and fell in love with him so much that they decided they needed to get a Great Pyrenees and of course some alpacas for their dog to guard!  He is definitely a farm favorite when visitors come.  After last farm day, Moose slept for two days.  He was so tired greeting all the guests and being loved on. 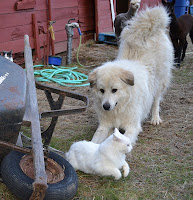 Moose has his favorites too.  He loves his barn cats and herds them back to the barn after they have been out hunting and exploring.  When he was younger and the cats were kittens just learning to go out and hunt, Moose would have a fit when he didn't know where his kittens were.  I'd find them cuddled together for afternoon siestas and they rub in and out of his legs.  The bad news is that the cats have taught Moose that it is nice to rub your head up and down legs.  I'm so bruised from that Moose head rubbing on my leg like a kitty cat!  He has one hard head that dog.

Moose protects my herd, my farm and me.  I sleep easier knowing I have a Moose On Duty! 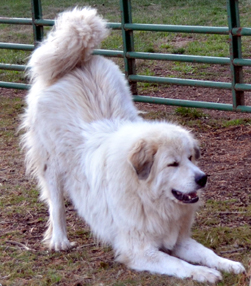