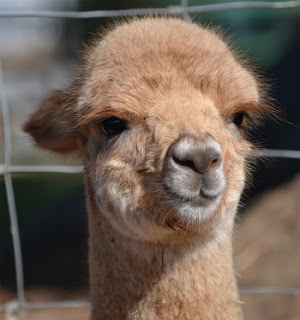 One of the reason I chose to live in Oregon's Willamette Valley is because I was only one hour away from Oregon State University (OSU).  There, they have one of premier Veterinary Schools and hospitals specializing in Camelids.  I knew they would have the best vet care if needed and I'd be close to up to date research on alpacas.  I hoped I'd never need it but it was nice knowing that I was so close.  My vet is very involved with OSU and their research so having him out to the farm is always a education as he shares the latest news from research studies coming out.  When my 5 month old cria, Djembe, was born with a heart murmur, Dr. Pat Long informed me of a new study that was just funded from Pacific Northwest Camelid Foundation to research camelid hearts using radiology techniques.  He asked if I might be interested in having Djembe be a part of this research.  I jumped at the opportunity since I'd get this amazing veterinarian care for Djembe under the study, and OSU would get a great opportunity to learn.  It was a win/win.

I loaded Djembe and Twister (his mom) into my Honda Element and drove the hour to Corvallis.  My nearest alpaca neighbor came with me since it's always a great learning opportunity to go to OSU and talk to the various doctors.  We were greeted by the Veterinary Student Sarah.  She led us to the big room where we would get an ultrasound done.  We met Dr. Venegas who was performing the research and specializes in radiology.  It was awesome seeing so many students and doctors in various stages of their education come in and take advantage of Djembe and what he could teach them.  He stood next to mom and nursed a lot.  He is a stress eater!  And when he was full, he still stood with his head under her for security. Twister was a world champion mom staying calm.  She stood still the entire time we were in the room despite the multitude of strangers coming and going (I counted and we had 14 doctors and students in the room at one point).  It was a great learning opportunity for me when I got to stay and watch the ultrasound.  The doctors were great about showing me what they were seeing.  The only ultrasounds I'd seen have been to confirm pregnancy and to my novice eyes, I couldn't tell if I was looking at his heart or if he was pregnant! 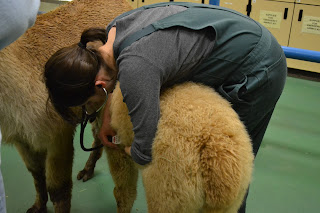 Although so very interesting, it was stressful knowing that my little guy had a serious issue with his heart.  The news was not good.  He had a sizable hole in his heart and blood was leaking back through into the wrong chamber.  I was told that as he grew, he'd most likely develop congestive heart failure and his prognosis for living longer than a year was bleak.  I was saddened to hear that.  The cardiologist who was also in the room and taking advantage of studying Djembe talked of doing a procedure that had been done on dogs before but never alpacas or camelids.  She said she'd be interested in attempting it on Djembe if I was willing.  Knowing this would be his only chance at having a normal and long life, I eagerly accepted.

I took Djembe in last week to have the procedure attempted.  Djembe and Twister loaded in the car again and off we went.  It was hard leaving him not knowing if I'd be bringing him back or just bringing his mom back alone.  They did a second ultrasound and got him prepped on one day and the next day was for performing the procedure where they would implant a device that would plug the hole.  They were able to get a better look at what was happening inside his heart as they put the probe down the catheter into the jugular.  They injected dye and could really see what was going on and they were amazed when they found that the hole had shrunk!  They repeated the dye twice to make sure and confirm it.  They aren't sure how or why the hole shrunk but it did.  The ultrasound the day before still showed the hole but it's not as accurate a look.  The wonderful news is that Djembe is going to get to live a normal life with his now small hole.  It didn't need the device implanted as they intended.  I was sad for the doctors that they didn't get to attempt their first implant procedure in a camelid heart but happy for Djembe and me that we got such great news.

My little guy charmed all at OSU and taught so many up and coming veterinarians as well as some of the leading Veterinarians in the country and world!  It was an honor being a part of research.