I came to alpacas in my mid-40's.  I had a couple of other careers and when I got into alpacas, people thought (including myself) that it was such a different thing to do than what my career choices had been.  I worked for nearly 20 years as an engineer for the Navy and then received my Master's Degree in Counseling Psychology with an emphasis in Depth Psychology.  Two careers that seemed quite different from each other and then to become an alpaca farmer is yet another crazy direction.  But as I have worked on my alpaca business and the more I'm around these animals, I am seeing how those previous career backgrounds are used regularly.  The skills I had in project management and problem solving are so useful that I obtained from my engineering background.  The area that I find the connection most intriguing is with my psychology background.  I'm amazed how many people that have suffered a traumatic experience(s) are drawn to alpacas.  There seems to be such a kindred spirit between the traumatized person and alpaca.

It makes sense that there is a healing connection between a traumatized person and animals such as alpacas.  The area of the brain that deals with the flight or fight response is very similar in all mammals including humans.  In a threatening situation, there are three means of response to the threat.  Most know of the flight or fight response.  We either run from the threat or turn and fight.  The third response is less known and it is when one becomes immobile or frozen in the moment of threat.  This is a physiological response.  When faced with an overwhelming threat, this "immobile" response can be a last ditch effort to survive.  It is commonly known as playing possum.  The animal or person "plays dead."  In the wild, an animal will go into this immobile state and perhaps the prey animal will drag it away from other predators so not to share it.  If lucky, the prey animal will get an instant that it can escape at which time, the chemical that puts the animal into this possum state will instantly wear off and the ability to run is engaged.  The other reason for this immobility response is to put the body in an altered state so it doesn't feel the pain of imminent death.  Peter Levine talks about this in his book "Waking the Tiger: Healing Trauma."  He discusses how we can learn much about trauma and healing it by observing animals in the wild.

Our society sees that reaction of freezing in the face of danger as a weakness.  When it occurs, we consciously and unconsciously judge ourselves for being weak.  Experiencing that freezing state goes beyond that judgement piece though.  That freezing moment is related to our fear of death.  Our desire is to avoid death and our fear of it at all costs and that is normal and understandable but it is that avoidance that causes future difficulties sometimes lingering debilitating issues.  How we are able to come in and out of that frozen state is an important role in whether we suffer long term traumatic effects.  If we stay frozen, that is when Post Traumatic Stress issues come into play.

Being with flight animals such as alpacas who go in and out of those three threat responses models for individuals who are suffering from trauma.  It can help teach them to move through those areas that they find themselves stuck.  An additional benefit to alpaca therapy is that they are so darn cute.  You are guaranteed a smile or laugh being around these creatures and their antics.  When we smile and laugh endorphins are released.  It is the body's natural anti-depressant.  I know personally that if I am in a down mood and funk, going out and being with my alpacas lifts my spirits. 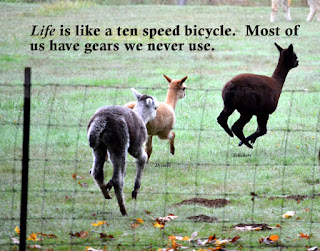