1000 Hellos: Alpaca Training and the Rewards of Patience

When I began clicker training and doing Energy Work on alpacas I was presented a challenge of working with Serena.  She was one of the most skittish alpacas at the farm when I was still boarding.  I had just gotten my first alpacas a few months earlier and had been experimenting with the clicker on my animals and had been having good success.  One day I came to work with my girl and I heard this horrible scream coming from the barn area.  It was ear piercing and could be heard from the far reaches of the 25 acre ranch. I ran to see if help was needed but got there to find all the humans acting quite normally.  It sure didn't match the fearful screams coming from the alpaca.  I was told Serena always behaved that way the second she was caught or even looked at.  Talking more to her owner I saw a glint in her eye as an idea took hold.  She looked at me and offered me a challenge.  If I wanted to prove my clicker training was worthwhile then I should see if it would work on Serena.  If I could get Serena to take treats and do some of the stuff I had been doing with my animals, then I would really know that it worked and she said she would be really impressed.  I said I would take on her challenge if she would keep Serena and her cria in a pen up by the barn for two weeks.  She readily agreed.

I waited a little while for Serena to calm down and went in to the pen to assess her reaction to me.  I didn't expect much especially after just being handled and going through the stress of her pregnancy test.  I was going up against a lot.  She was just confirmed pregnant which is when they are so hormonal and spitty to all.  She was extremely frightened of humans at the best of times and she had a young male cria at her side she would want to protect.  The odds of me being successful were slim.  She of course kept her distance from me but her cria was fairly calm and liked pellets and he came over to accept.  I thought perhaps he was my way "in" with Serena.

I went out every day for two weeks.  The first few days were not real successful.  Serena kept her distance but I got in some nice training with her boy.  He was a good candidate for the clicker so I worked with him all the while she observed me warily.  I had a thought of trying some Reiki on her.  I came in one day and sat down after working with her boy.  I just sat right down in the dirt with my back against the fence for my comfort and got as far away from Serena as I could in the pen.  I can "send" energy so used that distance technique.  I was amazed that after about 10 minutes, I watched Serena's eyes get heavy.  She did a few head bobs fighting off the sleep and then finally gave into it.  She cushed and dozed off with me in the pen with her!  I was thrilled.  It showed me she could calm down and that she was accepting the energy.  The next day I came back and tried again and she cushed quicker and fell sound asleep.  What was really astonishing was the fact that the vet was there again and there was so much commotion going on all around us and lots of stressed animals.  She would normally be on high alert wondering if she would be the next one to be caught but there she was sound asleep.  The owner passed by one time and did such a double take as she saw me sitting on the ground and seeing Serena sound asleep with me only a few feet away.  I saw her shaking her head as she walked into the barn.  The chances of me winning the bet and challenge were showing promise.

It came down to the last day of my two weeks with Serena and she was coming so close to eating from my hand.  She would eat pellets out of a trough with me sitting there and my hand near but she would only take it from the trough and not my hand.  After trying various things, I finally got her to take the pellets if I sprinkled them right next to my hand.  She had to touch my hand to get the pellets.  It took her a few tries and to get her courage up but she finally did it.  I let her do that a few times to get more trust in me and then upped the ante to putting the pellets in my hand.  She did it!  She took pellets from my hand.  It took all I had not to do a loud whoop!  But I didn't want to scare her so I kept my mouth shut.  She took more treats from me when I stood up and when I called the owner over, she got to witness me giving Serena pellets from my hand. 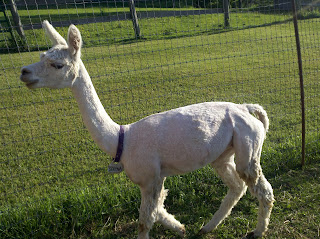 Unfortunately, once Serena got put back into the big pasture with the others, she wasn't about to come near me again.  I was a bit sad about that but that was all I was asked to do and I moved on to other training and working on other methods.  But, every time I saw Serena in a pasture, I would say hello and offer her pellets.  She always turned me down.  Two years passed and the most I did with Serena since our time up by the barn was to say hello when I saw her and offer her pellets that were never taken.  She never came closer than 10 feet near me and if I moved anywhere near her, she bolted.  So one day when I was walking down the path to do some work with my animals, I was caught by surprise when offering treats at random this white suri named Serena took treats from me.  I did a double take to make sure I was seeing right.  Yes, it was indeed Serena.  I offered her another handful and she took it again.  I found out later she was pregnant so that her being receptive to suddenly accepting treats wasn't because I timed it right to when she wasn't pregnant.  She had just decided that after two years, it was safe to accept and she was ready.  It was those 1000 times I said hello but never asked more from her and respecting her wishes for distance.  It was on her terms.  After that day, I went into the pasture and offered her pellets and got her to even give me kisses!

She now has a new owner that adores her and lives in a beautiful setting in Vermont where she gets tons of treats, carrots and apples.  Visitors mean more treats for her.  This once very shy animal that screamed if you looked at her now comes and gets her goodies, doesn't scream even during shearing!  It only took 1000 hellos.
Posted by Unknown at 6:55 PM