Today I got to observe the dynamics between the alpacas, my livestock guardian and me during a threat of a potential predator.  While out raking, I noticed a turkey vulture circling above my pasture.  It was up high doing slow circles and seemed to be watching where some of my new cria were napping or playing.  I watched it circling and didn't think too much about it.  I didn't think a turkey vulture would go after a cria.  I figured they were too big for something like that to go after.  They would go after much smaller prey or things already dead in fields or roads.  My livestock guardian has been into chasing birds out of the field so I called him over and pointed to the turkey vulture just because I know he likes to chase the birds away and it would be a fun game for him.  Moose saw what I was pointing at and ran barking and trying to lead it away from his alpacas like he normally does with other birds in the field.  The turkey vulture lazily flew across the way and I lost sight of it.

About 15 minutes to a half hour later, the turkey vulture was back circling again over the babies.  This time, my internal alarm started to go off.  I didn't like the feel of it and it circled over the field longer.  I was raking in another area but seeing that bird so intent on my babies, I went hurrying over to them with rake in hand and called to Moose.  He came running and barking at it and I stood near the babies until it left.  I watched for a bit and didn't see it so went back to raking.  Only 15 minutes or so passed and it was back.  I saw it and didn't wait long before rushing over to the babies.  Each time it came back it stayed overhead longer and longer.  I was officially worried about my babies.  I was to go over to a friend's place to cria watch for an expectant mom while she attended a friend's graduation.  I didn't want to leave my babies with that vulture ogling them.  I decided it was best to bring them in.  The vulture circled over head for quite a long time and at a lower altitude.  The adult alpacas in the pasture next to where the babies were began running back and forth.  The shadow of the vulture was floating along the ground and it was scaring them.  Moose didn't try and chase the bird away this time but stayed close to the alpacas that were running about their field afraid of the bird.  The moms had gathered the babies and took them under my giant maple tree and I stood between them and the vulture.   I didn't have my rake this time so took some sticks and tossed them in the air at the bird and looked for rocks to throw too.

I'm not sure how much time passed.  It felt like an eternity but it was probably only a couple of minutes before the vulture decided to fly off.  It wasn't going to be successful with Moose and me standing there.  I could tell it was coming back to see if Moose and I were going to be gone long enough to strike.  After it took off and I could no longer see it, I told my moms to take their babies back to the barn.  They would typically never let me herd them in that far away from the barn at that hour.  It was prime grazing time and they were about as far from my barn as they can get.  But they listened to me and we quietly walked back towards the barn.  I told them to keep babies near them and to keep walking.  They kept their babies at their side as we walked.  I told Jamilah who is my most intuitive alpaca and I have a close connection with to lead the way and take us back to the barn.  She did just that.  No one tried to run away or break from the herd.  They kept their babies close and we quietly and calmly walked back.  They stalled on the last leg but my friend Carrie was there so I called her to give me a hand.  She grabbed a pellet bowl and shook it and that got the alpacas' attention and they ran the rest of the way to the barn to get some goodies.  I was so relieved to have them back I got them some of their favorite alfalfa pellets to reward them for being so good about coming in for me.  I know they sensed the danger too.  I'm not sure if they picked it from me or from the flying predator or both but they trusted me enough to do what I needed them to do.  When the vulture was flying overhead, they kept their babies safely under the tree and when it was safe to get them moved, they listened to me to head to the barn.  They didn't complain once about being locked back in the barn area either.  I kept them there for a couple of hours before I felt it was good and safe for them to go back out.

I started to ask around to see if anyone else has had issues with Turkey Vultures going after their cria.  So far no one has.  Either they were incredibly hungry to try and go after such a large target or they were just thinking about it and sizing the situation up.  But I sure didn't like how they kept coming back every time Moose and I left the area and the moms and babies were out there on their own.  Moose is going to be hanging out with moms and babies for a few days when I can't be out with them.  What a good dog I have that he knows when he is needed and does all the right things to protect his herd. 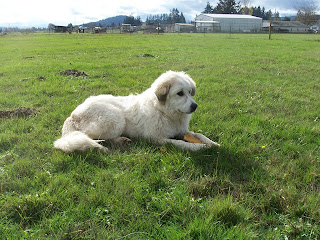 It was pretty cool to see how the alpacas trusted me during the time of danger and listened to me in what I needed them to do to help protect them too.  They don't listen to me very often so I was so relieved and grateful that they did when it mattered.  It was even more meaningful because those moms typically steer their babies away from me and this time, they knew I was not the threat but the one protecting their babies.  It was also very fascinating to observe and witness their dynamics while under a real threat.  The moms kept babies by their side and the single adults with no babies took charge of leading the way and being the guardians which allowed moms to hang back with their babies and it was cool to see moms put their babies in the middle while under the tree.  One of the babies tried to break off and I saw it and shooed it back and mom must have said something because it didn't try again and stayed right by mom's side until we got to safety.  These animals are smart and know how to deal with things.  So fascinating to watch but hope we don't have to do it again!
Posted by Unknown at 8:00 PM