Alpaca Therapy: How an Alpaca Changed Dynamics in a Teenaged Girl 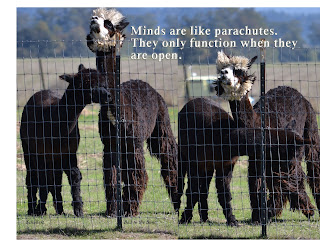 I recently wrote a couple of blogs talking about alpaca therapy and how alpacas can help people with various issues.  Someday I would love to work with a psychologist or therapist in designing a therapy program using alpacas.  There are many such programs out there using equine therapy as well as small animals such as dogs and cats.  Alpacas would be another wonderful modality to offer people.

I shared a couple of observations I had with the foster care facility I had invited out to the farm I had been boarding my alpacas.  I was giving a farm tour and had a bucket of pellets that the alpacas love so much.  I had about 20 kids with me and I was giving my standard talk about alpaca basics.  I was letting the kids take handfuls of grain to feed the alpacas.  A teenaged girl of about 15 or 16 was enjoying herself from the second she walked onto the farm.  She was obviously a big animal lover.  Her energy was extremely high but you could tell that it could shift in a heartbeat from being high to in your face anger.  She wore her hurt and anger on her sleeve.  She was the type that was going to hurt you before you hurt her.  I didn't know her story but you could feel her anger and pain coming out her pores.  I was thrilled that she was getting some time to let the anger go for a bit while enjoying the animals.

This young lady asked if she could take the bucket for a bit because she wanted to feed this one alpaca that was hanging back.  I looked at the alpaca she was pointing at and it was Scarlet, one of the most difficult alpacas on the farm.  I was concerned because I didn't want her to have a bad experience.  I had brought the kids to the alpacas I was sure would give them good responses and engage with them.  This alpaca was not only difficult for us humans but she didn't get along with the other alpacas either.  If there was a spit fight in that pasture, she was almost guaranteed to be one of the two in the spit fight.  I had tried to work with her and get her to take food from me but had never been even close to having any kind of success with her.  I told the teenaged girl that Scarlet had not taken food from anyone before but she was welcome to try and I gave her the bucket.

I watched for a few moments to see how she was doing and noticed she was square in front of Scarlet.  I went over to her and suggested that she turn her body slightly.  I told her that if you face an alpaca square like that, they will take it as a confrontation.  They read body language and that position is seen as being aggressive.  I suggested she try turning her body to more an angle and lower her eyes so she wasn't looking directly at the alpaca.  I got asked some questions by the other kids and was busy answering them when in about 5 minutes, this teenaged girl came over to me so excited.  She was literally hopping up and down.  She told me she did it!  She had gotten this animal to eat from her.  I was flabbergasted.  It took her less than 10 minutes to do what I had tried time after time after time to do.  I went over to see it and she wanted me to witness her success as well.  Sure enough, this alpaca was eating from her hand like so many of the others do with me.

Later after the kids left, I pondered on what I saw and realized that those two were absolutely two peas in a pod.  They both would spit at you before you spat at them.  They somehow recognized kindred spirits in each other and connected.  This was at a farm with over 400 hundred animals on it and she connected with the one animal that was just like her.

I had almost steered this girl away from working with that alpaca because I was afraid she would be disappointed if that alpaca treated her like she normally treated me.  I had never thought for a million years that a response like that was even possible.  What is really cool about alpaca therapy or any other kind of animal therapy is that it doesn't feel like therapy.  For kids, it feels like play.  I have no idea what diagnosis or treatment plans this young girl was on.  But what I do know is that with Scarlet, she got to experience connecting with someone she wanted to reach out to by changing her normal aggressive stance.  She didn't take what I suggested to her personally or defensively.  It was safe and non-threatening for me to teach her how to connect to this alpaca.  She took that advice and tried it.  Then she got to experience the success of it.  In that single event, this girl got to feel a different way of being with someone else.  Did this moment change how she was for the rest of her life?  I doubt it but can you imagine if she came regularly to the farm and worked with the alpacas how it could change her dynamics?
Posted by Unknown at 6:33 PM